Report: Who's Advertising for Job Candidates?

Small business, restaurants, retailers and numerous other industries are facing a labor shortage. In the restaurant industry, for example, employment is 8 percent below pre-pandemic levels, making recruiting and retaining employees the number one challenge. Looking at who's advertising today on radio, broadcast television and local cable provides insights into the top companies looking to hire.

Indeed was the top advertiser overall, airing 2,676,037 instances across all three media, according to Media Monitors advertising data covering the period between January 1, 2021, and August 31. The employment services company favored radio advertising, airing 1,675,546 in the medium, compared to 855,825 instances on local cable and 144,666 spots on TV.

ZipRecruiter was the number two advertiser overall and on radio and local cable. The employment services company aired 1,444,239 spots overall, with 956,945 on radio and 474,808 on local cable. 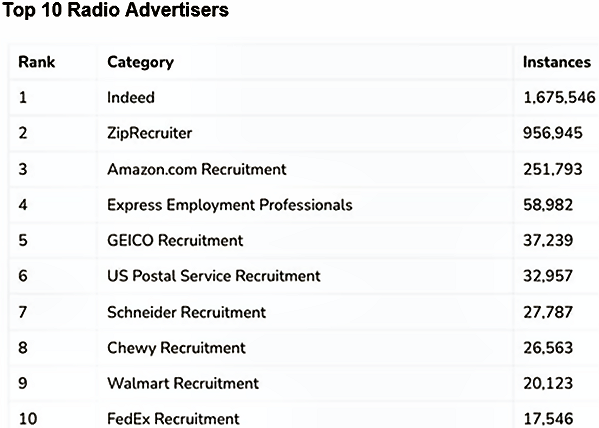 "In this tight labor market, companies are facing strong competition for a limited number of job candidates," said Media Monitors President and CEO Philippe Generali. "The largest companies often have the greatest need to recruit, so it's not surprising to see Amazon and GEICO among the top 10 advertisers. But small businesses are competing against these giants, so they need to be more active about promoting their openings. That's one reason we see employment services like Indeed and ZipRecruiter at the top of the rankings."

Amazon.com focused all of its advertising on radio, while Denny's divided its spots almost equally between broadcast TV, where it ranked second among the top 10 and local cable.

GEICO, which ranked at number five on radio, aired all of its spots in this medium. Meanwhile, Chewy aired 26,563 of its 28,664 instances on radio and the remainder of its spots on broadcast TV.

Other notable recruitment advertisers include Walmart and FedEx on radio, the U.S. Department of Veterans Affairs and UPS on broadcast TV, and Safelite AutoGlass on local cable.