The Media Monitors Podcast Listener survey, fielded between June 15-26, has been released. Participants ages 18+ were screened on whether they had listened to a podcast in the last seven days, then asked to list the podcast titles. Participants were encouraged to consult their podcast app of choice during the survey. The unassisted responses were then individually matched back to unique RSS feeds which were polled to collect information about genre and publisher. 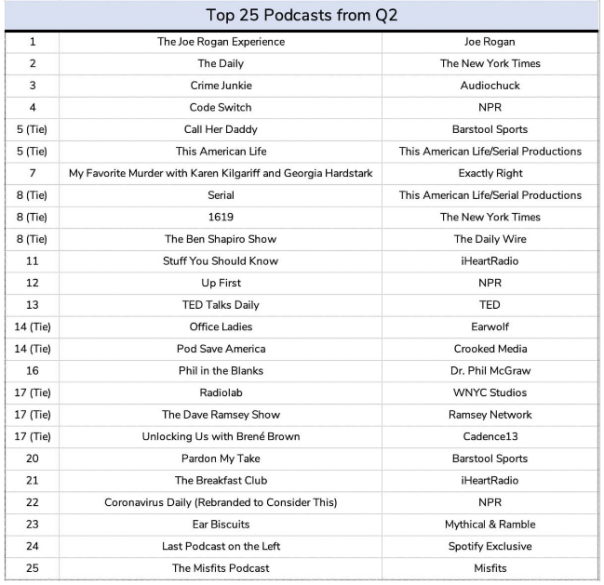 "The Joe Rogan Experience" and "The Daily from The New York Times "sit atop the fray at #1 and #2 respectively. Though their placement is expected, both shows seem to have expanded their audiences since our last survey was taken. Each podcast doubled the total number of respondents that reported listening in the past 7 days.

The New York Times' "1619" saw strong gains in Q2, commensurate with increased national attention on the Black Lives Matter movement in the U.S. and around the world.

"Office Ladies" appeared for the first time during the quarter, likely drawing on a large dedicated fanbase from the TV series "The Office."

"My Favorite Murder" and "Crime Junkie" made repeat appearances, with MFM sliding a few spots but staying in the Top 10.

Three surprises come from in the form of comedy podcasts "The Misfits Podcast," "Ear Biscuits from Ramble" and "Unlocking Us with Brene Brown" from Cadence13.

The second quarter saw further consolidation in the podcast space as Spotify purchased rights to "The Joe Rogan Experience" (#1) and SiriusXM closed a deal to buy Midroll/Stitcher/Earwolf, the company behind Office Ladies (#14). This move gives SiriusXM some level of access to Midroll's represented shows, including titles like "My Favorite Murder" (signed with Midroll in December 2019), but it is unclear how that relationship will evolve moving forward.

In another more recent acquisition, The New York Times has purchased Serial Productions, the company behind "Serial" (#8) and "This American Life" (#5). Although the exact terms of the deal were unclear (including a reported "'creative and strategic' partnership with 'This American Life'"), The New York Times has clearly moved to increase their footprint in upper echelon of podcasting.

Two of NPR's daily news programs have broken into the Top 25. "Up First" sits at #12 alongside the new "Consider This" from NPR at #22 (the Consider This... RSS feed was recently rebranded away from Coronavirus Daily). Both represent challenges to "The Daily"'s dominance in the Daily News category.

iHeartMedia leads all publishers on the Top 200 chart, with an impressive 13 podcasts. These include a mix of their radio-first properties published in podcast form, as well as their podcast-first Stuff Media properties. Coming in second is NPR with 12, followed by Wondery with 8. This seems to bode well for Wondery's new standalone app and premium service, debuted in June. It should also be noted that The New York Times (tied at 7) would jump to #4 overall if combined with This American Life & Serial Productions.