The pull that Social Media exerts on today's world is unquestionable. It helps us stay connected, keep informed, and is generally a source for light entertainment. But we now know there's a dark side which exists in social media that's tearing the fabric of who we are -- individually and collectively. It might only be 1% of the time or .001% -- but it's there and it's undeniable. If you have a teenage daughter you know exactly what I'm talking about.

As a business owner or brand manager, you need to ask yourself this question: what is your tolerance threshold for toxic behavior? Until recently, marketers have been willing to overlook the downside of their social media associations. As social media has grown in use and popularity, over time it has become an increasingly substantial part of media plans, and the digital ad dollars have flowed into it like a river.

But that river now appears to be changing course. Fortune 500 companies are beginning to draw a line in the sand perhaps due to big business' re-awakened sense of social responsibility, or the realization that they've been sunning themselves next to a cesspool. In either case, billion dollar advertisers are increasingly hitting the pause button on social media to deliver their brand message.

For brand managers, this move creates a significant messaging and marketing dilemma. No savvy marketer believes that simply cutting out a big chunk of their advertising is the right answer. Research and real world evidence proves that's a recipe for erosion in brand awareness, customer loyalty, and ultimately revenue.

When marketers jumped on the digital and social media bandwagon, in some cases it was at the expense of traditional media -- broadcast radio and TV. But due to a new, heightened societal awareness, the tectonic plates of marketing are again shifting. Marketers are responding to public outcry and their media plans are in a state of flux. As advertisers re-evaluate the media mix in search of brand-safe alternatives, broadcast media is getting a fresh look. "Consumer safe content" and "brand safe" are today's watchwords among CMOs. Unlike in social media, broadcast media is required by strict guidelines to regulate its content. For decades, AM/FM radio and broadcast TV have been regulated by the federal government. The FCC charter mandates that broadcasters serve the public interest. Steering clear of the "7 dirty words" is just part of it. "Brand Safety" -- a pre-built feature in broadcast -- is something that's largely been taken for granted by both advertisers and the public. But it's a compelling and fashionable value proposition in today's hyper-sensitive ad messaging world. The pendulum is in motion once again.

When the Plan Changes: Mid-year Course Correction & How to Maintain Campaign Results

Advertisers downsizing or opting out of social media altogether are being forced to revise media plans and reconsider budget allocations. For many brands, maintaining a broad audience reach is critical. Nielsen studies repeatedly confirm that Reach is the most important media-related element to the success of an ad campaign. For all the talk of traditional media being put out to pasture, good old AM/FM radio and broadcast TV continue to deliver shockingly large audiences. The Nielsen ratings validate the audience reach and targetability. It's an intriguing option for advertisers who just got thrown an anti-social curveball.

Your media plan just got punched in the gut, what are your options?

To help answer this important and topical question, the media experts at Nielsen turned to Nielsen Media Impact (NMI), a media planning tool designed to help marketers see what combination and proportions of media will yield optimal results. NMI is the nexus of the Nielsen ratings and a variety of media usage data sets. With it, users have the ability to run hypothetical media planning scenarios, mixing and matching different combinations of media. The system projects the combined, cross-media campaign results.

As a case study, the Nielsen data folks ran scenarios through NMI to see what happens when you pull $1M investment out of social media and split it between broadcast radio and TV. The results were eye opening: 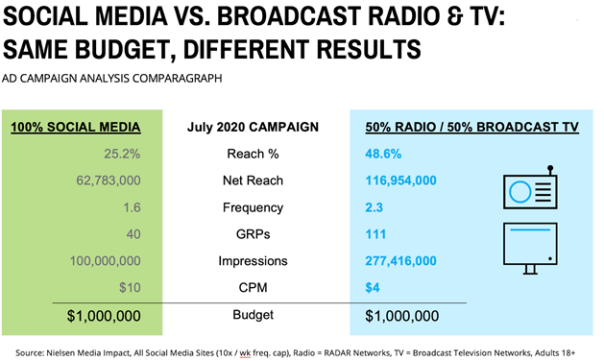 Shifting from exclusively utilizing social media, to a radio/TV mix, has noteworthy implications: The reach footprint of the campaign almost doubles. Gross impressions nearly triple and CPMs are cut by 60%. All with the same $1M ad budget.

Looking under the NMI hood, you can additionally see from the graphic below how a progressive reallocation in 10% increments affects audience reach. It's a helpful view to identify where the reach curve starts to flatten out, indicating a point of diminishing returns. 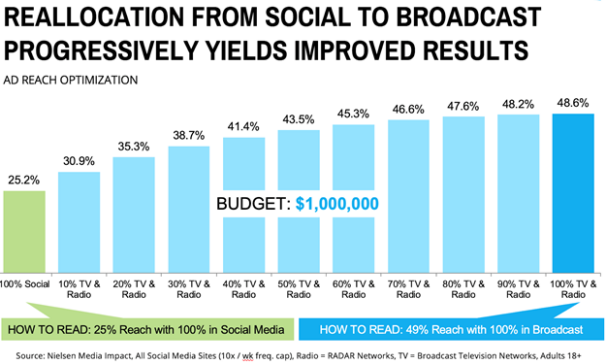 Bottom line: Socially conscious advertisers don't have to sacrifice campaign performance when they draw the line, take a stand, and send a clear message. Pivoting your media plan and reallocating ad spend to the relative safety of broadcast radio and TV can actually improve performance. Go figure. Maybe playing it "safe" is not such a bad idea after all. Now, as November approaches and politics take center stage in the ad world, it will be interesting to see if the candidates and campaigns will take the high road and follow suit. Let's hope.