BIA Advisory Services forecasts that for the first-time mobile advertising spending will surpass direct mail as the top media advertising platform in 2022. As revealed in BIA's U.S. Local Advertising Forecast 2022, the overall local U.S. advertising market is expected to reach $161.5 billion -- a 10.1 percent YoY growth. The forecast says that traditional media revenue will account for $84.6 billion and digital media will be close behind at $76.8 million. Radio is forecast at $12.6 billion and political at $7.5 billion. 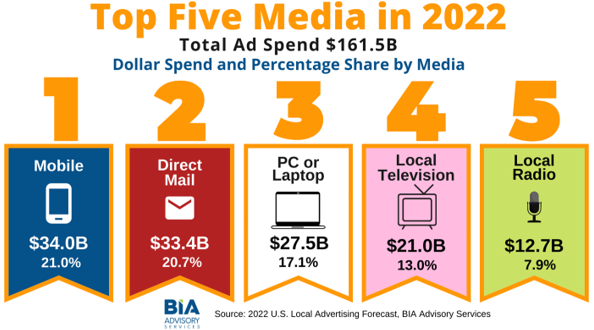 BIA Senior VP and Chief Economist Mark Fratrik says that the firm's U.S. Local Advertising forecast also sees a rise in local radio advertising revenue in 2022 and is expected to generate $12.7 billion split between over-the-air ($11 billion) and digital ($1.7 billion). By 2026 radio digital revenues are expected to reach $2.4 billion, while OTA goes up and down with the even political years and ends at $11.7 in 2026.

"Radio isn't faring as well as local broadcast TV, and it doesn't get the same bump as TV in political years," said Fratrik. "But it is getting close to its pre-pandemic levels as people continue to return to work commutes and traveling by car." 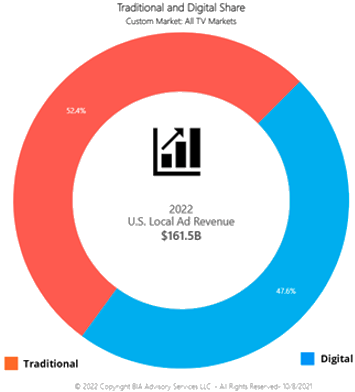 BIA puts mobile spending at 21 percent of the 2022 forecast and direct mail at 20.7 percent, but the gap between the two will continue to widen. Overall, digital ad spending will reach $76.8 billion, with Google and Facebook controlling over half of the spending. Google takes the lion's share at $26.8 billion, compared with Facebook's $14.3 billion.

As reported in late September, BIA forecasts local television in 2022 will rise to $19.3 billion in OTA advertising, and $1.7 billion in digital; a sign of a strong $21 billion industry that delivers its audience for political campaigners.