Study: How Many People Are Addicted to Radio in 2020?

NuVoodoo Media Services' latest NuVoodoo Ratings Prospects Study reveals that three-quarters of the study's overall sample -- including 6 in 7 among Millennials -- say they are addicted to their smartphone. Addiction to favorite FM radio stations holds up well in the study, given the many media choices today. Nearly half the Gen Xers and fully half of the Millennials in the sample say they are addicted to their favorite FM radio station. The study is based on nearly 4,000 respondents, ages 14-64, including a proportional group of over 700 Baby Boomers, across all PPM markets.

The number addicted to an FM station drops to just a third of Baby Boomers, which the company comments is "not surprising, since few stations are targeted at them." NuVoodoo plans to dive deeper into the findings -- now with Baby Boomers 55-64 included in the sample for the first time -- in its first installment of the company's annual spring webinar series: "20 Things to Put Your Station on Top of the 2020 Ratings." The free webinar series kicks off Thursday, February 13 and is open to all radio professionals who register for any of three sessions at www.nuvoodoo.com/webinars.

This is the 15th Ratings Prospects Study that NuVoodoo has completed since 2011. The company shares the top-level findings of its studies with its radio broadcasting clients to develop winning next-generation marketing and programming strategies for stations of all formats in PPM and diary markets.

In addition to media choices - including Social Media - NuVoodoo asked respondents whether they felt addicted to their smartphones. And smartphone addiction is immense:

The numbers addicted to FM and AM radio actually go UP when the Baby Boomers are dropped from the sample. Most importantly, the FM-addicted numbers shoot up to roughly 7 in 10 among the subset who'd be likely to participate in either Nielsen methodology and the AM-addicted numbers push up to well over half among those Nielsen likelies. 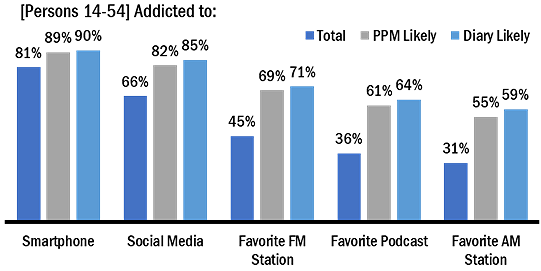 NuVoodoo Media Services Executive VP/Research Insights Leigh Jacobs said: "We are excited to take radio professionals on a deep dive into lots of different media habits and share key findings from the 15th NuVoodoo Ratings Prospects Study, including respondents' addiction to various channels and platforms. Based on our recent findings, social media and smartphone addiction are at epidemic levels across all but the oldest generations."

Jacobs added: "As is often the case, once we cross-tab results against that portion of our sample that would likely accept an invitation from Nielsen Audio to be a part of the radio ratings, addiction levels to AM/FM radio stations rises significantly, nearly matching social/smartphone usage. It's a perfect storm for radio stations playing the Nielsen game: influencing the most addicted listeners on the devices and in media environments where their habit is unbreakable."