Meanwhile, GEICO was again the nation's top national advertiser, airing 6,984,053 instances - also an increase over 2019 - across local cable, broadcast radio and TV. Procter & Gamble topped the TV and cable rankings, and held onto the number two spot for radio, where it followed closely behind the U.S. Government.

"Faced with a pandemic, civil unrest and a presidential election, Procter & Gamble held the course on its advertising strategy," said Media Monitors President and CEO Philippe Generali. "The company increased advertising of its brands in all channels, but particularly in radio, where it increased the number of instances by 44%."

"As the pandemic upended normal routines, an opportunity was created for some advertisers," added Generali. "For example, Babbel, a language learning app, rode a wave of increased interest in online education. The company advertised more on radio, where it entered the top 10 at number five. Meanwhile, insurance advertisers like GEICO and Progressive ran more spots for home and rental insurance and promoted givebacks on auto insurance."

Procter & Gamble wasn't the only advertiser to invest more airtime on radio. Another major brand, Progressive Insurance doubled its number of instances, airing 2,694,039 spots in 2020, up from 1,307,010 instances in 2019, according to Media Monitors data.

Even as safe-at-home mandates created rising interest in home improvement projects, Home Depot dropped to number three from number one. However, Lowe's increased the number of spots it aired on radio to 1,668,121, up from 1,410,499. It climbed in the ranking to number four. 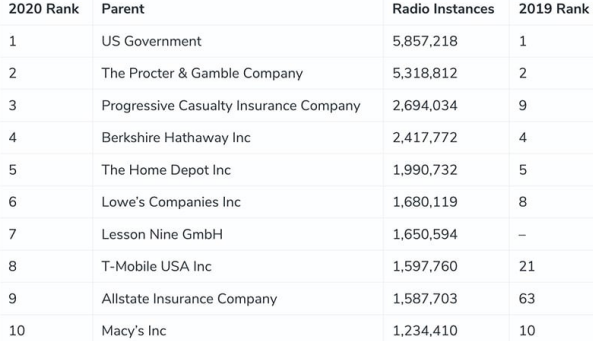 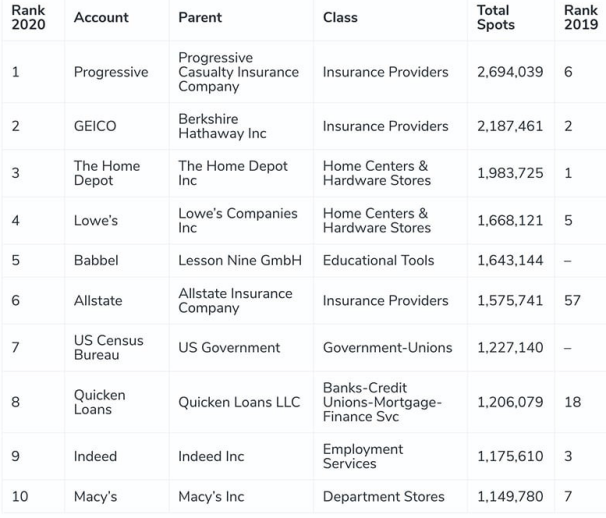