In a recent analysis of the top 20 most streamed songs on the five most popular music streaming services, Integr8 Research finds dramatic differences in the styles of music that users play most on each service.

"Among Amazon Music and Pandora users, Country is huge, comprising 40% of the most-played songs. On Apple Music, however, Country is virtually nonexistent," noted Integr8 Research President Matt Bailey. "Conversely, Hip Hop dominates the 20 most-played songs among Apple Music users and is also big on YouTube. Other than mass-appeal hits, however, Hip Hop is entirely absent from Amazon Music's Top 20." 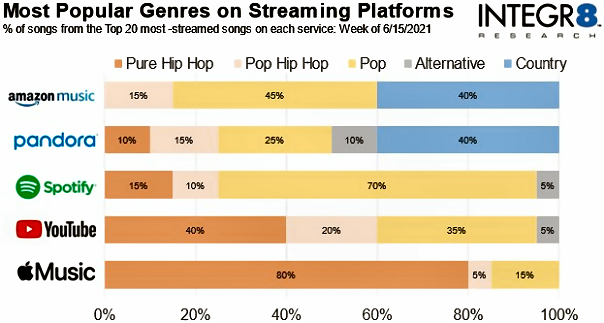 Spotify, the leading streaming music service in the U.S., lies in-between the extremes of Amazon Music and Apple, with Mainstream Pop the leading genre among the 20 titles its users played most.

What's most striking about Spotify, Bailey added, "is how consumers use it like a record store. When a big artist like Oliva Rodrigo dropped her new album, her fans flocked to Spotify to sample every track. It's a stark contrast to Amazon Music, where the biggest songs suggest people use it more like a replacement for radio."

The findings reflect the publicly released charts for each service during the week of June 15. Integr8 Research shares these findings and what they mean for radio programmers here.